Remember way back when we were kids and the idea of best friend was so important?

When does that stop being such a big deal?

I dunno. Maybe it doesn’t really, for everyone. Maybe some of you are sitting there with you one best friend and drinking beer and watching a game. Not a game that matters, sure, football season’s over, baseball hasn’t started, and hockey — well, nevermind. But a game nonetheless, with your best friend. Maybe you’re Taking a Ride, with your Best Friend. No wait, that means something different.

But there was a time.

There was a kid I went to school with. Back in the seventies, when I was — hmmm. Forth grade. Ten? Eleven? School was ‘Daybreak Institute’, the hippy free school where I spent most of that era. David was his name. David Wellbeloved. I think he was a grade behind me, but it was sort of irrelevant at our school.

First year he was there, I didn’t like him. I was the bad-attitude little thug, army jacket and weird hat and long, long hair. He was sort of rah-rah-ish, into sports, your basic good kid. We didn’t really hang at all.

But the second year he was there, we started to hang out. First time I ever got stoned, it was with David, on pot I swiped from my parents. We went on hikes when we were supposed to be in class. I sort of got him to break a few rules, and most likely a few windows.

I remember the weird stuff he always had in his lunch; some sort of olive salad that we called ‘chopped shit‘, potato kugle, all sorts of things I thought were funky. I remember trying to warm up his lunch one time over an improvised campfire by putting his lunchbox in the fire.

He had a weird bowl-shaped haircut. We called him “Mushroom”. I wish I had some pictures, but the all seem to be in my mothers hands. David was, without question, my best friend, at an age where this was terribly important, and at an age when I desperately needed a best friend.

He introduced me to comic books. Kamandi by Jack King Kirby was the first one I bought, and I still have it. He taught me to play baseball. We both listened to John Denver.

I can’t remember how many years we were in school together. IT seems decades in my memory; in fact it had to be very few. He and his siblings left school long before I did and went back to public school. David and I stayed in touch; we both collected comics. I sometimes worked his paper route for him. I went to my one and only renaissance Faire with him.

He turned me on to weird music; Zappa is the one that stands out in my memory. I got him listening to Horslips, my favorite celtic rock band. But gradually, we drifted apart.

Then his family left town. Moved off to Virginia, and that, I sort of figured, was that.

Cut forward a few years. 1986. I had just started work at Sun Microsystems, and we had a family vacation back easy. Maryland to meet in in-laws family, then a jaunt to Washington DC, then Florida for Walt Disney World, then the in-laws went home and we finished up with a few days of food, drink, and debauchery in New Orleans.

But I figured, hell, I was gonna me in DC. That’s not far from Charlottesville VA. I should look David up. 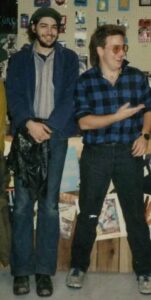 It was a weird thing, meeting someone after so many years. Yet, after the few moments of awkwardness at the fact that we’d both, you know, grown up and shit, it got easier and easier. David showed us around Charlottesville, we hit a few bars (David drinking only coffee, which he’d order with ice water on the side. He’d spoon in a few ice cubes and then pound the coffee), got a late-night dessert, and promised to stay in touch.

We didn’t stay in touch.

Over the years, we lost touch with each other completely. I tried to find him, but he was using a number of stage names as he played in bands and DJ’d. I, also, was using a slightly different name than he remembered. So, though we both looked for each other, we never quite found each other.

A while ago — maybe a year, maybe a little less, I tracked him down. After years of googling him now and then by his stage names, I finally tried his actual name, and bingo, there he was reviewing punk rock CDs on Amazon.

I emailed him, and he called me. I was in bed with a fever the night he got me, spaced and almost delirious, that odd high place you get when you’re just a bit fevered. We talked for a long time, after midnight here on the west coast, very late where he lives, back east.

And there we were; fourteen again. Best friends again for a moment. We both remembered, how important that time in your life is. How there’s no one else, ever, who will share that sort of connection your teenage best friend has with you.

I can’t stay we’re best friends still. We don’t really know each other anymore. We don’t have a lot to talk about, even though we share politics and taste in music, taste in books I would imagine. But there’s a place in our lives we both remember, a time and space that no one else will ever understand.

Friendships matter now in ways they didn’t then. My friendships now, adult, mature, casual and simple, and possibly the most important thing in my world. My friendship, once granted, is all but permanent, committed, loyal. Not the friendship of a teenager, vulnerable to fashion, differing tastes, changes in school of geography. But a part of me misses that simplicity and purity of friendship, when you could poke your fingers win pins and mix blood and say blood brothers forever, and mean it with the fervency only a teenage can muster.

Who needs to wait 4 years for a #KoT? Got the Raff