First tattoo since well before pandemic, and I could not be more pleased with it. This is a tribute to two dogs gone too soon – mine, Thela (named for a King Crimson song, Thela Hun Gingeet), five years ago, and my friend’s, (Otis)  two or three months ago. Both far too young and much missed.

Also though, it’s for my current dogs, Vera (named for a Blue Öyster Cult song), and Levon, named for Levon Helm.

Really though it’s for all the frenchies, because they’re awesome dogs and I love them all. 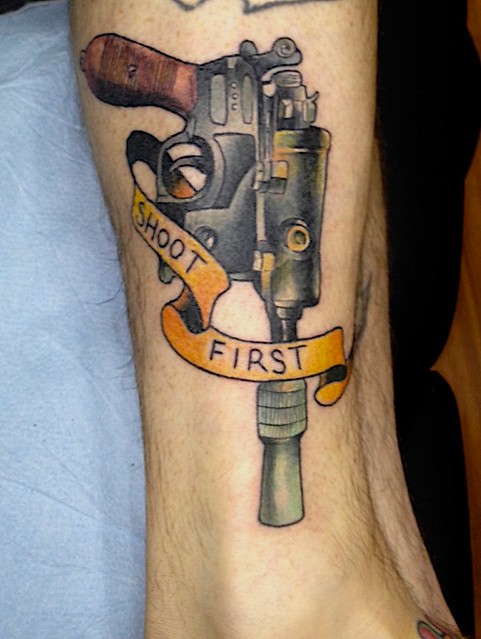 If you don’t get it, google “dl-44 heavy blaster” and “han shot first”

Edit: it’s kind of amazing, this pic got picked up on fytattoos.com, and yet I got only ONE comment. almost 800 likes and reblogs on fytattoos, you’d think SOMEONE would say hi here.

I guess anything more complicated than a ‘like’ is a think of the past. I guess I better look for a ‘like’ plugin for WP. B^)