A blog, a journal, a web site, about writing, love and lust, sex and pain, anger, kilts, skull rings, drugs, music, piracy, tattoos, geekery, books, food, movies, politics, insanity, and whatever the hell else I feel like saying.

My life, in short. In oblique slices and obscure cross-sections.

What Does It All Mean? 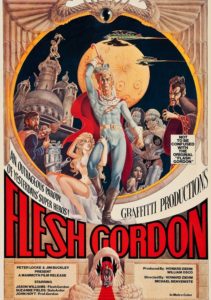 The name Moronosphere was stolen from one of my favorite movies, Flesh Gordon. There’s a scene (starting around 18:00 here if this link still works, though no promises) in which the protagonists must fly a dick-shaped space ship through a zone called  the moronosphere (“Hang on now, we’re going through The Moronosphere!”) a scene in which they must fight the stupidity of which that zone is filled (not unlike a journey across the middle of America). They next fly directly into The Sex Ray, (which is another domain I own.)

A co worker of mine mentioned this film one day, and it occurred to us that ‘moronoshere.com’ would be a very funny domain name; he didn’t claim it, so I did. And there is sat for several years, registered but without anything there.

In 2004 when I first began to blog, I suddenly needed a web site (I wanted to self-host), so brought it up to host Movable Type (and later, WordPress). The rest of the story, you could find here, if you wanted to go all the way back and start reading (but I don’t recommend it).

Karl Elvis MacRae (that crazy motherfucker named Elvis) was born in Iowa City, Iowa in the fall of 1961, but escaped eight weeks later. His parents finally caught up with him in the wilds of northern California, where he was being raised by a collection of circus animals and side-show freaks. There was a short, brutal fight over who had to keep him, and his parents lost. For this, they will never forgive him.

He was educated in the fine arts of partying and goofing off at what is generally known as a ‘school’ but might also be called a summer camp for delinquents. While he was there, several buildings burned down, but no charges were ever filed.

Karl Elvis is a pervert, a writer, an engineer, a very good scuba diver, and won’t take ‘no’ for an answer.. He’s a blogger, a lover, a traveler, a drinker, a gourmet and a gourmand. He is a biker, a kilt wearer, and is not quite completely covered with tattoos. He’s been pierced fifteen times on purpose, and maybe a few times by accident. He’s a good father and a Bad Daddy and a Dirty Old Man.

He reads sci fi and writes erotica, plays guitar very very poorly, listens to fifties jazz and seventies funk, the heaviest metal, and any band with an ümlauted name. He’s has been called punk as fuck by random strangers.

You may also find his pictures on the ‘ten least wanted’ list at your local post office.

Get all up in Karl Elvis’ Grill below.

One thought on “About”