My new ride – 2008 FXDB ‘Street Bob’ See a couple more shots from the dealer’s web side here: http://www.flickr.com/photos/karlelvis/5934551594/ When I was a kid, my Aunt Penny used to date a biker, a guy in some bike club vaguely connected to the Hell’s Angels. His truck as always full of harley parts, and his […] 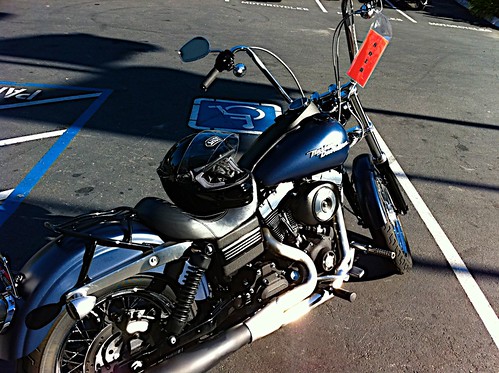 See a couple more shots from the dealer’s web side here: http://www.flickr.com/photos/karlelvis/5934551594/

When I was a kid, my Aunt Penny used to date a biker, a guy in some bike club vaguely connected to the Hell’s Angels. His truck as always full of harley parts, and his friends user to show up at all hours, dressed in leathers and riding outlandish chopped and bobbed machines.

I loved him, I loved his friends, and most of all, I loved their bikes.

Not long ago, when I was cleaning out Mom’s house, I ran across some saved xmas wish lists in one of mom’s journals. My brother wanted typical kid toys; tricycle, hoppity-hop, pogo-stick, games. Mine? Weapons (new pocket knife), toy guns, and on almost every list, the words “motorcycle” or “chopper”.

I’ve loved motorcycles almost since I could walk. My father rode – vespas when I was little, and then honda and suzuki 250/350 class bikes (bikes I’d love to own now, what great cafe racers they’d make!). My Aunt’s friends rode. my mom’s bosses road (they owned a bookstore, and rode BMW’s, and used to take me out on errands when I was hanging around the bookstore).

Honestly, it’s a suprise it took me so long to get my first bike – I just kind of got distracted in my early twenties. I don’t think I actually got my first motorcycle ’til I was close to 30, but I’ve been a dedicated, almost every-day rider ever since.

I’ve never stopped wanting a harley. But you know, it’s not just harleys.

My first bike was a clapped-out ’83 yamaha Virago 920, that I bought for $800; it was worth maybe half that, and had mechanical problems in almost every part of it. It sucked; it was heavy as hell, ran like shit. And I loved it to pieces. Since, I’ve been through a half dozen or more bikes, in all styles. Yamahas, kawasakis, triumphs; cruisers, standards, sport bikes, touring bikes, cafe racers. I just plain love motrcycles. And I’ve never had a motorcycle I loved as much as my Triumph Thuxton, best bike I’ve ever owned.

But you know, there’s something just plan beautiful/stupid about a harley.

Now, don’t get me wrong. I don’t love Harley-Davidson�. I don’t love the brand, or the logo, or the image. Not as it is today, not with the gloss and the eliteism and the air of superiority. I don’t love the logos, and as much as I love harleys, I kind of hate when people ask me if i ride harleys (they assume shaved head and tattoos and beard and shades and boots and skull rings has to mean harley).

I almost universally dislike anything that says ‘Harley-Davidson�’ if it isn’t a motorcycle. But god dammit, I love the moyorcycles. I love the machines themselves.

I’ve had severa go-rounds with almost buying a harley. In the 90’s I was on a waiting list (back when you had to get on a waiting list for harleys) for an ‘low rider sport’ (a sapphire blue FXR with factory low drag bars), but bagged out at the last second because 1) I really could not afford it at the time, and 2) there were spousal approval issues. I’ve had a couple of near-missing with H-D’s since, the last being two years or so back when my doctor (who’s a huge motorcycle freak) had his bike, dripping with extras, up for sale for a steal of a price. But i forgot the whole thing during a minor work crisis, and he’d sold it before I got my head back on to it.

Like all great chance things though, a harley just walked back into my life the other day – though not this harley.

My doctor knew I was vaguely considering a harley; we talk bikes every time I see him. So when one of his riding buddies mentioned he was selling a harley, Doc thought of me and gave my contact info to said buddy.

You’ll laugh, and maybe weep, at this fucking monstrosity. It’s a labor of love (maybe bad love). The seller and his pal bought matching FXSTC Softail Customs in ’99, and set about chroming the living fuck out of everything. Both bikes had custom paint, custom matched seats, even helmets painted to match. They did a spectacular job, and loved the hell out of these bikes at one time. But recently, they’d both moved on to new hobbies, and just sort of quit riding much. One of the pair (that one in relatively understated purple/blue flames) sold last year, and this create just went up for sale in the last week.

Thing is though, my aesthetic, almost universally, isn’t garish. My favorite colors are gray, army green, and black. I like things one color, not shiny. I generally hate chrome. My aesthetic for cars runs to primer gray, and my clothing is mostly black, gray and green. If a t-shirt decoration has more than one color, I generally won’t wear it. So this? It’s just NOT ME.

Thing is, though, that I absolutely LOVED riding it. I didn’t want to give it back. Paint or no, if I’d had a checkbook in my hand, or if it’d been a grand cheaper, I might have bought it on the spot. But I wasn’t quite committed.

I left thinking, I am probably going to buy that.

Only, the more I looked at the picture, the more I realized the paint was going to make me crazy, and so was all that shiny-shiny chrome. And it just seems criminal to change it.

I waffled, with each waffle-cycle getting closer to ‘no’.

And then I though, well, fuck, I really want want a harley, and always have. Not that harley, but really. Why don’t i have one yet?

And I made the mistake of perusing current models.

What I did not want: fussy, complicated, full-dress, touring, or small small starter bikes. What I did want: stark, simple, as non-shiny as possible. This quickly got me to the Street Bob. And I started looking for used bikes.

Alas, I found the exact thing I wanted, at my nearest dealer. When I talked to him later, he said “your mail came in at 3am, what were you doing, midnight shopping?”

This bike has exactly what I wanted: bobber style, almost all black, no chrome to speak of, matte-finish paint (Harley’s low-gloss ‘Denim’ paint). It even has an amazing rinehart 2-into-1 pipe which is both unique looking, and sounds awesome (a bit louder than I’d ideally want, but wow, beautiful).

I didn’t intend to go buy a harley. But sometimes one just has to give in to lust.

Oh, and no, I did not get rid of the Triumph. Not on your fucking life. I’m keeping that bike, probably forever. Funny, though; when I was picking up the Street Bob, I left my Thruxton at the harley shop for a while. All the mechanics came over and looked at it, wanting to know if it was coming in as a trade, and when I said no, if I wanted to sell it. When the harley mechanics want your bike, well, that’s just cool..