Nine years ago, I started this blog.

I kind of want to load my posting data into a grapher to see how my posting frequency curve goes. From frequent to really really frequent, and then a long slide into almost-never.

I bet you could lay that against blogging trends and the growth a facebook and twitter and see the implosion clearly; as social media finally got a real foothold, blogging crashed and burned.

That probably makes sense. Blogging was a fad, something of an era; every fucking person on the internet seemed to have a blog for a six month period there. And then they didn’t. Abandoned blogs are the ghost town of the decade; people will tour them some day, dodging tumble weeds and spam links and stealing mementos.

Actually they won’t. Because unlike ghost towns, blogs leave nothing behind but empty hearts and minds. No blood no guts no brains at all.

There are exceptions, obviously. Great writing happened, and is still happening, in the context of blogs. No, the issue wasn’t a lack of content, it was the opposite. It was that signal-to-noise problem that chases us around the internet; when something works, really works, it has the life span of a snowflake. Perfect, brilliant, ephemeral, and then gone, lost in the waves of its own success. The sheer mass of irrelevancy and stupidity swamped the goodness and buried it.

But you know that. And anyway you’re not reading; who reads blogs anymore?

I was trying to figure out where to start in this update. Where am I now, and where was I last time I actually used to write about it?

Last time I had double-digit updates in one month was November ’09.

So you can see where I sort of abandoned the idea of talking about myself on the internet. I’m pretty sure that corresponds to various life events, though I frankly have neither the desire nor the strength to try to correlate it.

Bottom line is, my life’s been complicated, but it the worst, most trivial and tedious way.

Long time readers (I don’t know if that’s plural any more) know I’ve been through some incredibly painful crap the last few years; to the point where I got really self-destructive, made really bad choices, nearly lost my job, and wrote incredibly well.

This current wave isn’t like that. In the last couple years, it’s that shoelace shit; a job that just keeps getting busier, kids having various breakdowns, family schedules of unimaginable complexity, financial troubles, health issues (mine and others). It comes down to the minutiea of the ordinary: too much to do, too little time to do it.

And I’m getting old.

Ok, I know, 50 looks good on me. The other day, a sexy MILF in a Peets coffee addressed me as ‘young man’ (there’s no way she’s more than my age). I can still get away with dressing like a teenager – skinny jeans, slouchy beanie, combat boots, tee-shirt over thermal. And it’s not the grey – yeah, the beard is largely gray now, but gray in that steely way that looks weather-beaten from hard riding. And I’m at the lowest weight of my adult life; from a high north of 250, I’m down around 210; for the first time ever, I weigh what it says on my driver’s license.

No, the age is on the inside. I feel it in my fucking joints. My shoulders tend to ache now, and my knees can’t take as much pounding. I can’t drink anymore (it just makes me sleepy and gives me a headache); there’s gin in my liquor cabinet that’s been there wince – well, I was drinking dirty martinis with dark-haired girls when I bought that bottle. I fall asleep too early and sleep like crap these days. And my eyes – I carry three pairs of glasses with me now, far, near, and dark.

Fuck you. I’m still angry and dangerous, and I absolutely will do the wrong thing to you given half a chance. You still should not trust me with yours wives, your your girlfriends, your sisters or your daughters. The difference is, I’m a little bit smarter and move a little slower.

What I won’t do is get old gracefully. I can’t seem to avoid getting old, but I can avoid acting old. I drive like I always have – get out of my fucking way, you – I ride motorcycles, I scuba dive (deep), I go out of my way to do the more dangerous things. What age tends to bring to this is only that I now think about how long recovery will take before I go do something (sorry, honey, I’m not 25 anymore).

I’m not afraid of being an old guy. I just hate having any limits placed on me, you know?

Maybe this explains why I’ve missed a blog anniversary; my eyes ain’t what they used to be. 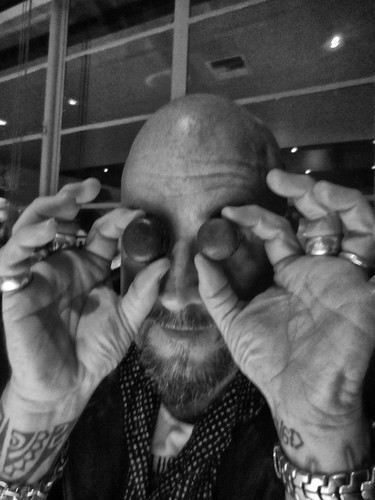 Maybe this explains why I’ve missed a blog anniversary; my eyes ain’t what they used to be.

Wow, it’s kind of hard to belive I’ve been blogging for seven years. That’s several eternity’s in internet fad years. Blogging, as a cultural phenomenon, is more or less over. Yes, there are still many, many blogs, and some of them are very good, and very important (PZ Myers, for example); but those blogs have […]

Wow, it’s kind of hard to belive I’ve been blogging for seven years.

Blogging, as a cultural phenomenon, is more or less over. Yes, there are still many, many blogs, and some of them are very good, and very important (PZ Myers, for example); but those blogs have really moved into the realm of journalism. We have the funny-syndicated-columnist (dooce is this generation’s erma bombeck), we have science and political writers.

But we don’t really have a ‘blogger community’ anymore. The success of social network platforms and microblogging has pretty much removed any need for the casual blogger to maintain a blog; the community is on facebook|twitter|tumblr.

However, that doesn’t mean the blog as a creative medium is irrelevant; just that we’ve moved into a new phase, in which those who still do it, do so for more traditional reasons.

Obviously, I’ve fallen out of both camps.

In any case, this last year has been a bitch.

The very short story about all this is that my kids, inheritors of all the worst kinds of mental health genes, have both melted down in different ways. We’ve had hospitalizations, outpatient therapy groups, medications to manage, and more money spent on various therapies than I can possibly afford.

It’s felt like a running fight for our lives.

I’m not superstitious; i’m a skeptic, an atheist, an empiricist. I don’t belive in the idea of a jinx. And yet, i’m almost afraid to say in print that things may be getting better, finally.

All I can judge my is the climate in my household, the emotional temperature. And things seem, faintly, to be warming. It’s like those early hints of spring to come, when the weather isn’t really warmer, but the air smells different. The battle is one fought daily, but headway, in tiny steps, is being made.

This isn’t a battle that started in 2010; it’s a battle years longer in the making. BUt its’ a battle I could’t fight on my own. No amount of clarity of mind and understanding of problem and solution can solve other people’s personality disorders; it’s just something that has to come in it’s own time, it’s own way.

Part of the reason I’ve so completely drifted away from blogging is that so much of what I do and say has been, for ages, filtered to maintain calm; after a certain number of years training a habit, it can come to be default behavior. Not saying what I really think, not telling the whole truth, has become my default state.

My hope is that I can find some way out of that state; by changing my life, my approach, and my habits, I can achive progress not just in my home life, but in my creative liufe as well.

Photography has been an incredible help to me.

I have a burning need to create; yet my media avenues are limited by capability. Music has never worked for me, as much as I live and breath it; I have no rhythm whatsoever, and no great ear for tone. I can’t sing at all. Fine arts, also, defeat me; I have no great manual dexterity. My hands are made to swing axes and carry loads, not to perform tiny, detailed motions.

But there are tools available to me that do not require these gifts; the keyboard, the camera. So while, temporarily, my gift with language has deserted me, I find that I do have other abilities.

The act of making something for no reason other than to create beauty is incredibly satisfying.

Thus my blog may change focus for a bit; but I find I have creative voice again, and once again, a reason to blog. And that feels good.

@levon_the_french_bulldog is happy I’m back on H

Every time I get a delivery like this it feels lik

The game for next few weeks: see what exercises ca

After years of being a peets purist, I’m samplin