Suddenly, it’s a picture blog, instead of one made up of words. Is that what happens when one’s been blogging for seven years? Maybe so; maybe the economy factor (the 1k multiplier) necessitates that, when one is capable of only minimal words, one let images speak. Or maybe I just got a new camera. Yeah, […] 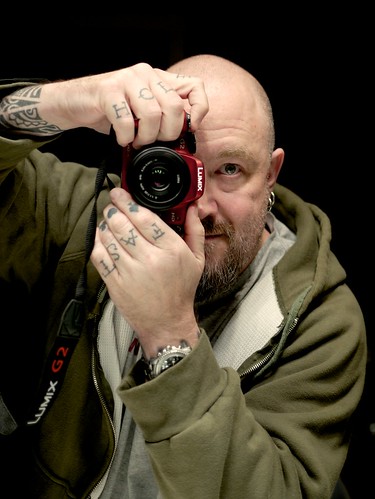 Suddenly, it’s a picture blog, instead of one made up of words.

Is that what happens when one’s been blogging for seven years?

Maybe so; maybe the economy factor (the 1k multiplier) necessitates that, when one is capable of only minimal words, one let images speak.

Or maybe I just got a new camera.

Yeah, I think that’s it.

It’s funny, i’ve been interested in photography my entire life. Yet, I think this may be the first camera I’ve owned since I was, what, 14?

My first camera was a Kodak Hawkeye II instamatic. This was my second, a kodak pocket camera.

I loved taking pictures, but I think it was the lack of immediacy in feedback that got to me. I never knew what I was shooting ’til months later when we’d finally get photos back from the fotomat. I even took darkroom classes, and for a while had a dream of building a darkroom in my parents garage, but I never quite got that organized.

Digital changes all that, of course, yet for some reason i never got a camera of my own. Partly it’s the lack of need – Barb always has a camera with her, so she would collect the family snapshots or friends-at-party shots we needed to document social events and travel. But with the advent of very small, very good digital pocket cameras in the early 90’s, she was forever done with SLR’s; a camera you have in your pocket gets more shots than one you have in a case on your shelf.

However, I’ve always found pocket digital cameras frustrating. They’re limited in what they can do, they’re slow (recently that’s begun changing, but only very recently). They have kind of crappy flashes, not-that-good optics, and most important to me, no view finder. I grew up shooting through the camera, and framing with a screen never felt natural. Every now and then I thought about an SLR, but barb has less than zero interest in a camera you couldn’t throw in a pocket or purse; it just didn’t suit the way she shoots.

It wasn’t until recently that I started to think – why not just get a camera of my own?

Hanging out with truly gifted photographers will do that. My friends DB Walker and Kenny Shick, for example. I’d watch what they were doing with good (but not great) dSLR cameras, and then i’d see the results (visit those flickr pages above for examples), and I would think i wish I understood that. I wanted to know how they did what they did, and why what they do is so much better than what I could do with a pocket camera. What does the gear do, and what part of this is artistic expression vs skill, vs very good gear.

Last summer at the Vashon house (it suddenly occurs to me I’ve never blogged about the vashon house, i’ll fix that later, but in short, a vacation rental on Vashon Island, WA that we’ve visited the last two summers), I happened to pick up my friend Bonnie’s dSLR when I couldn’t find Barb’s camera. The Vason house comes with several local beach dogs, and kids + dogs + beach is always a photo op.

When I put a view-finder to my eye and started shooting, I found what I’d been missing with digital camera. Manual focus and a true view finder, and suddenly I felt like I was really taking pictures.

I probably shot a couple hundred kids and dogs shots, and I have no idea of a one ever came out (i never got them from Bonnie). But it didn’t matter; what mattered was that I found I wanted an SLR.

I’ve been sort of half-heartedly reading about beginner dSLRs since; I was kind of leaning toward a Pentax K-x, which reviews all agree is a really good entry point (the fact that it comes in purple and lime green is only a lucky bonus).

At Christmas though, one of my cousins-in-law walked into the room with a camera I’d never heard of or seen before – what’s called a ‘micro 4/3‘, the Lumix dcm-gh1.

Without belaboring technical details, the 4/3 standard is a new digital camera standard which is designed for digital from teh ground up. The ‘micro’ in micro 4/3 is that they’ve used the 4/3 standard to design a downsized camera with fully interchangeable lenses. One of the things that makes this smaller is the lack of mirrors and prisms; which means they’re not really a true SLR. However, cousin Ross’ camera solves this by using an electronic viewfinder (basically a tiny, super-high grade video screen inside a viewfinder).

The result is a camera that can use almost any lens (with the correct adapters), is fully auto, or fully manual, and which, with a smaller lens, can pretty much fit in a pocket.

I spent xmas day reading about this camera, and then xmas evening at another family event, I borrowed Ross’ camera and shot a whole bunch. This convinced me. This camera was in the price range I wanted, and could do what I wanted. Sure, there are trade offs; the electronic view finder takes some getting used to particularly for manual focus. BUt the flip side is the amazing size and lightness, which answered my primary doubt, ‘would I carry it with me’. Because as above, the camera I have with me is always going to get a better shot than the camera I left at home.

I finally pulled the trigger on Dec 28, after finding a great price on a dcm-g2 at jr.com.

I got my camera Jan 5, and since, have been learning how to make it do things. The first thing I discovered was that i knew dick about how to shoot with an SLR other than in full auto. But I figured something out, after doing a bunch of reading; that is, that photo sites like flickr have a ‘view EXIF data’ pulldown. The EXIF data is a treasure trove, showing almost anything you want to know about how a pciture was shot. I began browsing photos I liked, and looking at details.

Meanwhile, I did a bunch of shooting at a place in San Jose where a friend’s band was playing (my best photos from the gig are here), figuring out what I wanted to be able to catch – and then I went to expert frineds and said, what is the trick to getting these shots, in low light with no flash. “FAst Lens”, DB Walker said, which sent me off to do more googling (very large aperture, he meant, 2.8-1.7 kind of range). And another ligtbulb went on in my head, and I was back at the EXIF data now looking at apertures and lenses, particularly on photos shot with my same camera. This quickly led me to a particular lens, what they call a ‘pancake lens’ (a super short, simple, fixed length lens) – 20mm, 1.7 aperture. A very fast, very well reviewed, reasonably inexpensive lens.

The self-portrait above was my first set of tests with the new lens; shooting with room light at portrait range. I couldn’t be much happier with the result. I wanted to capture detail, texture, flaws and features. All I did do it in post-processing was to warm the light, and then raise the back level to turn the already-dark pure shadowy black.

This is the best shot I’ve ever taken. And I am only just beginning to learn how to do this.

0 thoughts on “on pictures being 1K*WORDS”

The game for next few weeks: see what exercises ca

After years of being a peets purist, I’m samplin

The real Fleetwood Mac. The best version of #rattl